Springboks on verge of Tri-Nations title 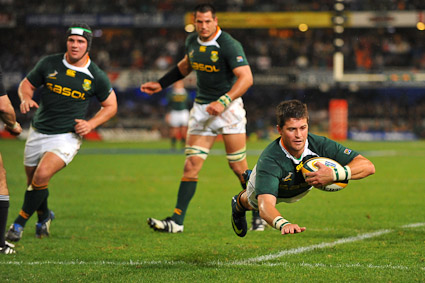 These photos I shot in Durban when the Boks played against the All Blacks before their away leg of the Tri Nations.

You could say the Springboks have got nine fingers on the 2009 Tri-Nations crownafter harvesting five golden points at the Subicao Oval.

It was the South Africans’ fith consecutive victory in this year’s competition, and their 11th in their last 12 games, in a remarkable year of rugby that stretches back to the very same Springbok team being booed off the pitch in Durban after losing to the very same Wallabies.

Australia have not won a Tri-Nations since – they have lost four in a row this year to go with the two defeats in their last games of 2008.